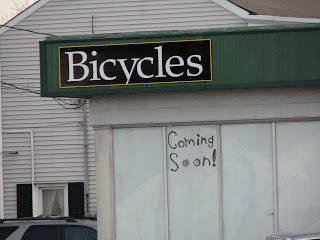 That’s the day West Trails Bicycles sheepishly opened its doors for business. The storefront glass had been covered in white-wash during the previous three weeks spent renovating the space, which had been vacant (other than storing a huge collection of junk) for more than half a decade. Most of the glass was still covered on that Thursday morning. We cleaned the front door off first, then a patch in front of the used “Open” sign that we found on Craigslist. By the end of the day, most of the glass was transparent again.

Some very supportive friends put in a lot of time helping us transform the derelict store into a charming (if I may be so presumptuous) little bike shop. We had a couple of lookers the first few days, there was a lot of curiosity about what was happening to that old corner storefront, and many disappointed locals that were hoping for a more convenient place to buy smokes and Cokes—but even they were supportive of having something new come into Miamitown rather than another business going away.

There were many, many, kind words… lot’s of verbal encouragement and support from visitors, but no income for the first few days. We had to wait four long days before our first sale of any kind. But by day five we sold a bike! Within a few weeks we were fairly overwhelmed with business. We were not rolling in the dough, but we were paying our expenses and (hopefully) establishing a reputation of integrity. When colder weather slowed things down in the fall it was a welcome break from the onslaught.

All in all, it was a good first year. No major screw-ups—we did our best to under promise and over deliver. We met a lot of nice folks and even made some friends. We helped get some people with physical issues back on bikes, and a lot of people back on track to a healthier lifestyle. We enjoyed having bikes come in for service that had just been “serviced” by certain other shops but worked no better than before the fleecing. We offered discounts to those folks, because we enjoyed showing off our competency, and we wanted them to get what they paid for even if most of the pay went to someplace else. And though it has been a LOT of work with little monetary return on investment, so far, it has seemed like a good trade.

We will be smarter this year, and hopefully wiser, and we hope to be able to offer even better service.

Thanks for supporting us. Please spread the word. Tell your friends about us. Review us online. “Like” us on Facebook. Come back and visit us.

WTB has survived its first year!