Why are Bicycles so Expensive?

Q: “Why are bikes so expensive?”

I’ve heard it a few times over the years from different people, a statement almost exactly like this;

“I bought my first bike for $25. These prices now are ridiculous!!”

Judging by the age of the people I heard this statement from they likely made that value defining purchase around 1950. According to various inflation calculators, $25 in 1950 = $247 in 2015

They can get a bike shop quality bicycle with 1950’s technology for about $235 these days. 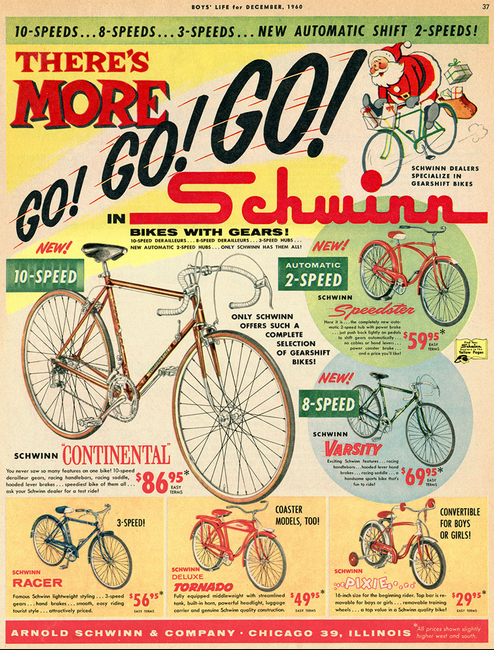 “But the bikes stocked at WTB start closer to $350! See what I mean, your bikes are expensive!!!”

“But I don’t remember my bike being uncomfortable back then.”

Look, if you were alive in 1950 you were not old enough to care about comfort. This too has changed over time…

If you were able to go back in time with your 2015 $350 to 1950, your money would deflate to about $35 but you would still not be able to buy a bike as nice as an entry-level bike in a bike shop today. In 1950 no matter how much money you were willing to spend you couldn’t get what today you can get at such a bargain price.

I often hear older customers describe 1950’s technology bikes saying “That’s what I’m looking for, I don’t need all this fancy stuff, just a basic bike like when I was a kid, it was good enough then, it’ll be good enough now.”

To them I say, “Yes, you had no problems riding such a bike back then. You are older now… and you weigh a lot more… Now it will be a problem. Sorry, that’s just the way it goes…”

On it goes like this with ever younger sentimentalists. As it turns out no matter how long ago you bought that bike that forever defines for you the reasonable price of bikes, when you compare the amount spent then to today’s dollars you get a bike now that’s much nicer for the same, inflation adjusted money.

Q: “Why are bikes so expensive now?

A: Guess what? They’re not… but they are much nicer!