After our chance encounter with the allure of primitive roadways we started looking at maps and satellite images trying to find gravel roads, creek crossings and dead-end roads that were not completely dead to a bicycle. There are not many of these features left in our area. Roads keep being “improved” and though once common primitive roads are becoming as rare as common sense or privacy.

Though we continued to ride our pavement optimized road bikes on our searches for adventure, we started realizing they had some shortcomings. We switched from skinny 23mm wide tires to slightly less skinny 25mm tires to help with stability, traction, and to reduce the likelihood of pinch-flats, but a 2mm increase was really not enough. Unfortunately many road bike frames just don’t have the clearance for tires much wider than what came stock.

After creek crossings we noticed that our rim brakes took a dangerously long time to respond till they dried-off. Disc brakes, we knew, would be the answer, but they are not an upgrade that can be made to most bikes.

Gearing too was an issue. Though even racing style road bikes these days come with lower low gears than they did in previous generations, gearing on road bikes is optimized for asphalt paved surfaces which rarely get as steep as some gravel roads. Even if a grade is not super steep usually you have less momentum going into a gravel climb, (approach speeds are generally slower) and the bumpiness further kills-off momentum. On a gravel climb you can quickly find yourself scrambling for a lower gear.

that Norco introduced their “Search” Adventure Bike, AKA Gravel Bike. 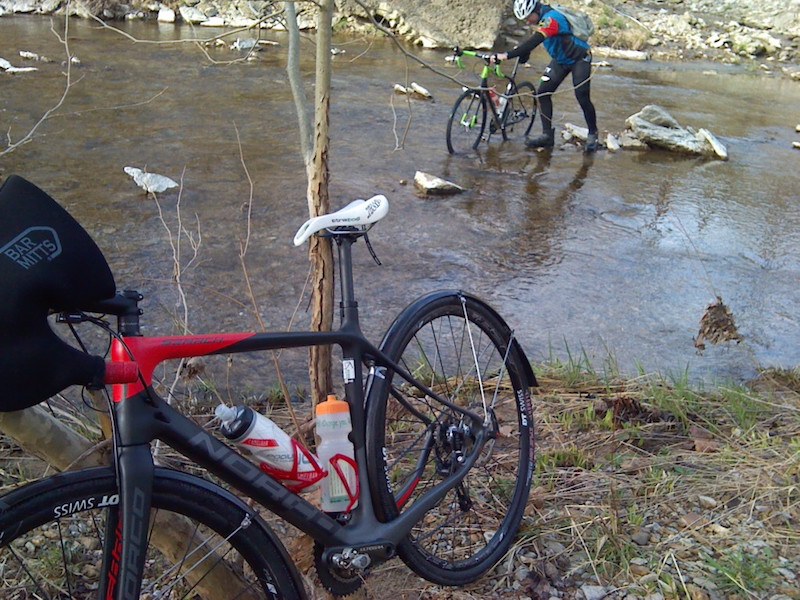 It was “just the ticket” with a sturdy vibration dampening frame, a wide gear range to facilitate road bike speeds on smooth pavement and extra low gearing to climb the steeper than modern road standards allow, gravel hills. They also came stock with 35mm wide tires with room to spare, and had disc brakes!

We became the first kids on the block with real-deal gravel-road-worthy bikes!

It concerns me when I find myself involved in a “trend”, after-all I like to think I’m a leader rather than a follower, but there was no denying it, gravel bikes are a trend and we are part of it.

I still ride my “Go-fast” road bike when we ride smooth paved roads, but often I get the itch to take the “Road more Graveled”, and that’s when I pull out my Norco Search.