Speaking from ignorance… … and immersive experience, respectively, I have some thoughts and observations on one of the most divisive issues of our times; Running vs Bike Riding.

I admit that from an experiential level I know almost nothing about running, other than I have done it (running was one of the most commonly used skill sets for playing in the pre-computer world), and I was relatively good at it.

There were 3 bullies in 3rd or 4th grade that spent the entire recess period, every day, chasing me to; “beat me up”. It was excellent training. They never caught me. Did I mention… three to one?!

By 7th grade my friend Mark told me we were saving-up and buying road bikes. Apparently science had eliminated the need for running. There were very few occasions after that to have to resort to the obsolete mode of speedy conveyance of my youth.

I realize that not everyone is as fortunate as me to have Mark there to guide them in the crucial moments of life. And many un- “woke” individuals have continued running not just for play, but as a challenging form of cardiovascular maintenance.

I’ll admit there are some advantages that running has over bike riding… Ok, there’s really only one, but it’s a big one:

There’s no need for equipment. Even shoes are not a necessity, though for most westerners getting running shoes is more practical than building up the callouses required for shoeless running. 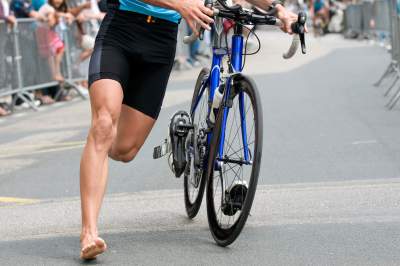 You can run almost wherever, whenever, for seemingly little cost. (Note the term, “seemingly”, we’ll be getting back to that.)

Bike riding, however, requires no less than the acquisition of a bike.

A bike shop quality bike for casual use will seldom cost less than $350. Most runners are putting out effort above a casual bike ride. A bike that will be appropriate for a use/effort level equivalent to a frequent runner might cost closer to $1000. A more frequent, more intense runner might put out the effort that an even more expensive bike would be more suited for.

Compared to the price of running shoes this bike riding thing sounds expensive!

The math is simple: The cost of a bike, and various accessories, vs the cost of running shoes, and the life changing drama & monumental expense of joint replacement surgery.

More on that coming soon.