Traffic – Part 1 of 4: Getting Around

I attended ExpoCycle, Canada’s annual bicycle dealers trade show in Toronto, a couple of weeks ago. Afterward I had a few days to explore the town on my bike. 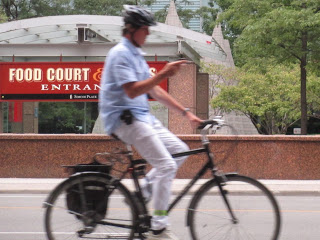 First, (or actually by now, second) let me tell you Toronto is big. Compared to Miamitown… well even Cincinnati, for instance, Toronto is way bigger. In Toronto EVERYBODY rides a bike, but everybody drives too, and takes taxi’s, and walks, and rides streetcars, subways, trains and busses. Yes, I know it doesn’t seem to add up. Let me explain.

If you took everybody in Greater Cincinnati and cloned them nine-fold, and put each iteration on one of the aforementioned transportation modes, then took the last batch and divided them up to travel by skateboard, roller blades, roller skates, and “other” (I’m not exaggerating, there really are a number of commuters in the streets with traffic, using skates and skateboards), I think you’d have an idea of what’s happening out on the streets of Toronto. 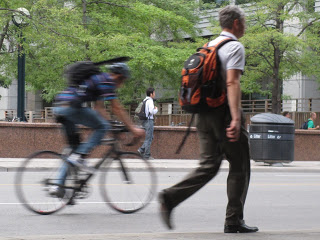 When I’m stateside, I commute the vast majority of the time to work via bicycle—I’m no newbie at this game. Most days I bet I have to interact with a dozen cars, as well as an occasional pedestrian or squirrel, in my 3.5 mile journey to and from Miamitown. A couple times a week I even see another commuter on a bike on Harrison Ave.

In Toronto, I had to interact with dozens of cars, pedestrians, cyclists, skaters, boarders, and “others”, just to get out of the parking garage driveway, then dozens more as I plowed my way to the first intersection, all the while overtaking and being overtaken by cyclists traveling various speeds on and amazing array of bicycle styles.

But it’s more complicated than that. Bike lanes come and go. Street car tracks seem to be everywhere just begging your tire to slip on the steel track or get wedged in the gap between the track and pavement. Pedestrians are swarming the sidewalks and oozing onto the streets at intersections. 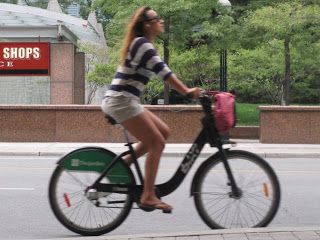 There are separate sets of traffic lights for the street cars right next to the lights for the rest of traffic, so at times you are simultaneously faced with a red light AND a green light. Cars parallel park and pull away from curbs. Car doors open and close. Cabs move from the left lane to the curb just inches in front of you to grab a fare. Roads end, or become one way. “Do not enter”, no left turn, no right turn, road construction… it all comes at you so fast.

From my description, you may think that it’s bumper to bumper gridlock. No, actually it’s not even what one might call “crowded” much of the time. There’s a lot of traffic moving, but it’s a sort of roomy traffic like on a busy college campus. Except on the “expressway”—there it’s grid-lock. Could the prohibition of bicycles be a contributing factor? Hmmm…