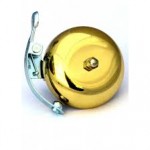 Sure you can shout “hey!!!”, but the hearer would hesitate, turn around to see what all the “hey”-ing was about, and by then it would be too late. Or, you could call out the tedious, “on your left,” but that must be said when you are in close proximity, can be startling, and also comes with the stigma of sounding like, “Hey slowpoke your flab is oozing into my path. Get out of my way!” And to those of us who are right-left challenged, it can just be confusing.

But a bell is straightforward, impersonal, nonjudgmental, and not intimidating (at a safe distance). It’s a signal to warn that there’s a bike behind you, how far back you can perceive from the sound. It warns you to not be surprised if you should get passed, and reminds you that the entire pathway is not for you to takeover, so stay to the right. If cars had bells rather than aggressive sounding horns, there’d be a lot less anger generated on the roadways. Horns sound angry; bells remind us of Santa. 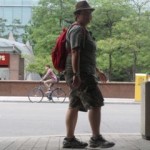 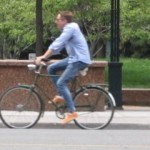 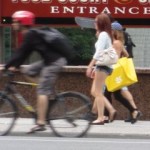 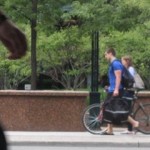 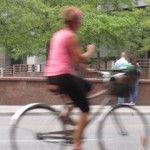 I rode for quite awhile before I remembered to use my bell. It was just one more thing to be aware of and do in an overwhelming situation. But as I became more practiced at commuting I was able to add the bell to the list of controls that were at my finger tips. 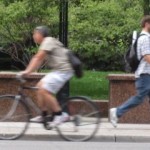 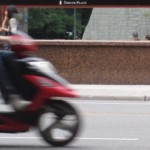 My advice is to not cheap-out. Get a nice bell. The cheaper ones are harder to control volumetrically. The first time I tried using mine (I cheaped-out) I was not forceful enough and the sound was too wimpy. The slow weaving rider in front of me continued to take up the entire lane of the bike path. By my second attempt, I was far too close to him for as loud as it sounded. It could have… should have, startled him, but he must have been deaf (seriously). Finally, after several attempts at getting his attention, I swerved out into the grass to pass him.

After that I decided I needed dinger practice, so on a part of a trail where I had not seen anyone for quite a while I pulled back and rang the bell. Just as it sounded, an oncoming rider appeared from around a sharp blind curve with a startled expression on his face, and fighting to get his bike back into his side of the path. “Wow, not only did the bell save us both from impact, but he thought I actually did that because I was smart enough to realize it was a good idea when approaching a blind curve, and not just because I was playing with my bell!” 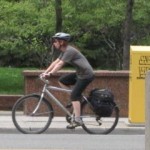 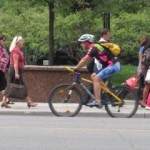 Now, with a better understanding of the powerful tool at my fingertips, I tried to not be obnoxious with it’s over-use and focused on only using it when it seemed prudent. In one situation an obviously first-time roller blader struggled to stay upright by holding onto a railing. She had her back to the edge of the trail and was facing inward. Surely if she had any peripheral vision at all, she’d see me coming and as twitchy as she looked the bell might have startled her. As soon as I passed her, she let out a gasp of surprise, and by the sound of desperate shuffling behind me, I’m pretty sure she fell down.

The key seems to be, “Go ahead and ring the thing.” If you wait too long as you assess the situation, you might get too close to ring without startling someone. Worst case, you are at least putting folks into a Christmassy frame of mind. 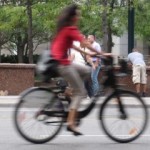 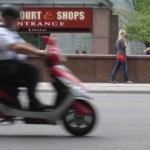 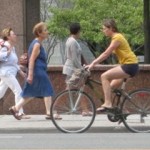 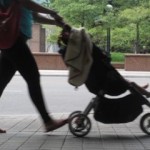 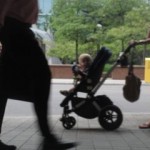