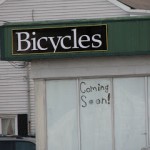 March 25th 2010 That’s the day West Trails Bicycles sheepishly opened its doors for business. The storefront glass had been covered in white-wash during the previous three weeks spent renovating the space, which had been vacant (other than storing a huge collection of junk) for more than half a decade. Most of the glass was still covered on that Thursday 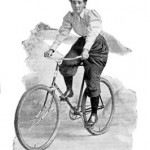 Bicycles can change the world? Yes! They already have. I’m not kidding. In the US, so many people were smitten by the allure of freedom and self-powered speed that the bicycle offered—even in its early, awkward forms—that they were able to work together as a positive force to get municipalities to pave roads that had previously been rutted dirt tracks,