A Chance Encounter with Adventure

There’s a lot of hype over “Gravel Bikes” these days.

I’m not a hype kinda guy. I’m more interested in what I’m interested in than what others tell me I should be interested in… the irony is, that over the last few years I, and others in the West Trails Bicycles family, have grown increasingly interested in riding “The road less paved”, at about the same time as bikes for that purpose started to appear. 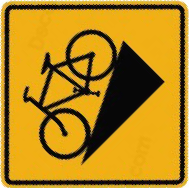 It all started with a chance encounter with a steep, rutty, loose graveled descent that, if thought about for another second, I would have decided to U-turn and avoid. But a rule I default to is, “No turning back”. If I am leading a group and I am lost or off course I try to appear to be on course by continuing ahead. Turning back leads to grumbling and a loss of confidence (though temporarily justified) in my leadership. Plowing ahead, even though it likely adds miles, keeps the perception of my competence intact. And, as a bonus, new territories are discovered.

Having ridden most of the roads within a 30 mile radius of Miamitown we were constantly pushing further and exploring. That’s how we ended-up on an unpaved precipice. The pavement suddenly ended. Stopping to evaluate would have looked a lot like, “Hmmm… we must be lost”.

About 25% of the way down the hill it became clear that stopping was not an option.

Between the steepness and the looseness the best we could do was lock up the rear wheel and feather the front brake just shy of locking-up, and surf… It was, as they say, touch & go.

Somehow we all made it, wheels down, all the way to the bottom. Turning back here would have meant an up-hill hike as awkward as the perilous descent. Though the way ahead was still gravel at least it was fairly level. We had entered the Valley That Time Forgot.

Soon this all but abandoned track took us through a short, single lane, dark, drippy tunnel carved through the hillside. Then we splashed through a crudely poured concrete creek crossing, (not a bridge) complete with slippery green algae. Then up a short steps bank suitable for 4WD SUV’s, then onto an increasingly improving gravel/turning into asphalt, road.

“Wow…” the other riders must have thought, as the blacktop came into view, “… He actually knew where he was going!”

Some of the riders were not very keen about taking their smooth pavement optimized bikes across such harsh terrain, but for a couple of us it was the start of a lust for unpaved adventure and, most of all, creek crossings!